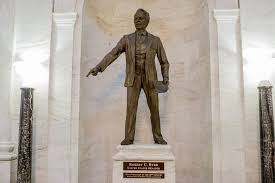 The “Protesters” who are currently taring down statues without regard to who the statue represents. These “protesters” are the dumbest people alive. They are tearing down statues of people who were part of the abolitionist movement. There is one statue that has escaped the tare down Democrat mob. These would be the statues of the late Senator Robert Byrd (D-WV) that are all over West Virginia. At the age of 23, in 1940 Robert Byrd recruited 150 people to create a new chapter of the Ku Klux Klan in his home town of Sophia, West Virginia. Because of his great recruiting work, Byrd was elected an Exalted Cyclops in the KKK by a unanimous vote.

I shall never fight in the armed forces with a negro by my side … Rather I should die a thousand times, and see Old Glory trampled in the dirt never to rise again, than to see this beloved land of ours become degraded by race mongrels, a throwback to the blackest specimen from the wilds.

Robert Byrd was a member of the KKK when he was first elected to the West Virginia House of Delegates in 1946. He even wrote a letter to the Grand Wizard of the West Virginia, stating the Klan is needed in every state in the Union. Robert Byrd in is own words HATED black people. Byrd was a recruiter for the KKK. Meaning, he signed up new people who also hated black people. He advanced the hate of the KKK. Byrd led the filibuster of the Civil Rights Act of 1964 holding up the legislation for 83 days. When it came time for the vote, Byrd voted NO on the Civil Rights Act of 1964. Here is the Roll Call Vote: